Petanque is extremely simple, just like horseshoes. There’s a target, and you have to get as close to it as possible.

What makes it so appealing, is that you can be way ahead for a while, yet lose a second later, or vice versa. Because nothing is decided until the last player plays the very last boule. If he or she moves the target ball or knocks an opponent ball out of the way, the layout of the boules – and thus your score – may change dramatically.

The Basic Rules These are illustrated and will get you started in no time at all.

The Official International Rules (10-page PDF file) make provision for many different scenarios that can occur during a game. 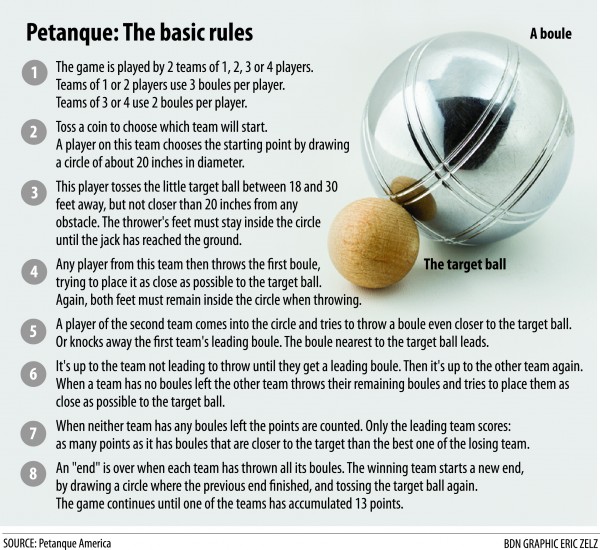 Who can play this game?

The answer is simple: anyone.  Age, strength or speed are not important. Advanced players against beginners? There is always a bit of luck involved, especially on a bumpy terrain, so neither the beginner, nor the “pro” will get frustrated. Wheelchair competitions are popular as well. As a matter of fact, petanque evolved early this century from an old French bowl game (la boule Provencale), when one of the old champions, meanwhile suffering from arthritis and mourning his heydays, suggested there be no more running and jumping: everyone should throw the boules standing still, feet together, in a small starting circle. The old champion was back in the game! These days, on many market places in France, petanque is played day in, day out. While retirees are in the majority during weekdays, teenagers and everyone else who wants to unwind for a while will join them after school or work and on weekends. Meanwhile the news of the day circulates, sometimes interrupted by heated arguments over the measuring abilities of the other team. But always in a jovial spirit: after all, if you don’t win today, you’ll win tomorrow, or next week or next year. These players are more than friends. One day, their children will play together just like them…

France, especially the Provence, where petanque originated, has always been a popular holiday destination, so more and more tourists started to play with the locals, bought sets and introduced the game back home, in Germany, Great Britain, Holland, Belgium, Scandinavia, Spain etc.. On the other hand, many French expatriates would pack up a set of boules when they moved, and the game spread throughout the world.

What kind of court is used?

Any surface, with the exception of concrete, asphalt or tiles will do. Best is not too soft however: on a regular soft sandy beach, for instance, the boules will drop dead, without rolling any further. But most beaches do have a harder part, e.g. close to the dunes, which is perfect. Very short grass will do as well. The best is hard soil, like clearings in the woods, baseball diamonds or an unpaved backyard. Some fine gravel enhances drainage and makes it more exciting and unpredictable. There are no limits as to maximum size of the court. The generally accepted minimum is 4 meter (13 ft) wide by 15 meter (49 ft) long.

Actually the word “court” is a misnomer. We use it here because many people search for that term. Petanque is by nature a game one can play without a setup, sort of like frisbee. You could start on one end of a driveway, and end up at the other end, 300 ft further, when you’re done. A player can toss a target ball towards a tree, to be in the shade for the next round, or into a rougher area, because  that’s his/her favorite surface, or wherever he/she likes to play. Obviously, if you want to play in your garden, and your space and /or budget is limited, a rectangle is the logical shape.

But we always like to convince those who are designing a larger playing area not to stick to – say 6 neat independent rectangles, but rather a plain open area that fits into the surroundings. A tree here and there makes it so much more enjoyable.

Bocce balls are usually rolled palm up, petanque balls tossed palm down, so they get backspin upon release.
Petanque balls are the size of an orange, hollow, and always made of metal.

Bocce balls are larger and solid, about the size of a grapefruit, colored (green & red are popular), and generally made of resin or wood.

Bocce has different variations as to court size and layout. The court should be smooth and flat; some rules call for wooden sideboards to make it an enclosed area.

Petanque can be played on almost any terrain; most players actually prefer an uneven terrain to make it more challenging.

The counting of points and game tactics are very similar between the two games.

Overall petanque is more flexible, (no need to find a court), and the equipment is easier to carry around. For the record, there is a variation of bocce, (“bocce volo”), where balls are delivered palm down and metal balls are used. The players’ run-up in this one is spectacular, similar to “boule Provencale”, the forefather of petanque.

After a while, most players start to specialize in either “pointing” or “shooting”.

To point means to close in on the aim ball with precision, and to place your boule in a tactical position. This is commonly achieved by lobbing the boule. After hitting the ground, it will roll the remaining feet and inches.

A shooter on the other hand will directly aim for an opponent’s boule to knock it out. When hit accurately, the arriving boule will actually replace the other one. It’s a spectacular sight, and known as a “carreau”, the perfect shot. In triplettes, (teams of 3 players), one will generally also find an all-round player, (“milieu”), who is good in both pointing and shooting. His/her skills will be called upon, when one of the other two players is out of boules.

Where does the word “petanque” come from ??

As explained above, one should keep both feet fixed when throwing a boule. No run-up.
In Provencal language, that’s called “pieds tanques”, from the verb “tanquer” i.e. to anchor or tie down. This marked the difference with existing bowl games in Provence, like “boule Provencale” and “boule Lyonnaise” where one takes a number of steps prior to throwing the boules. 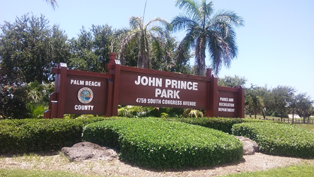